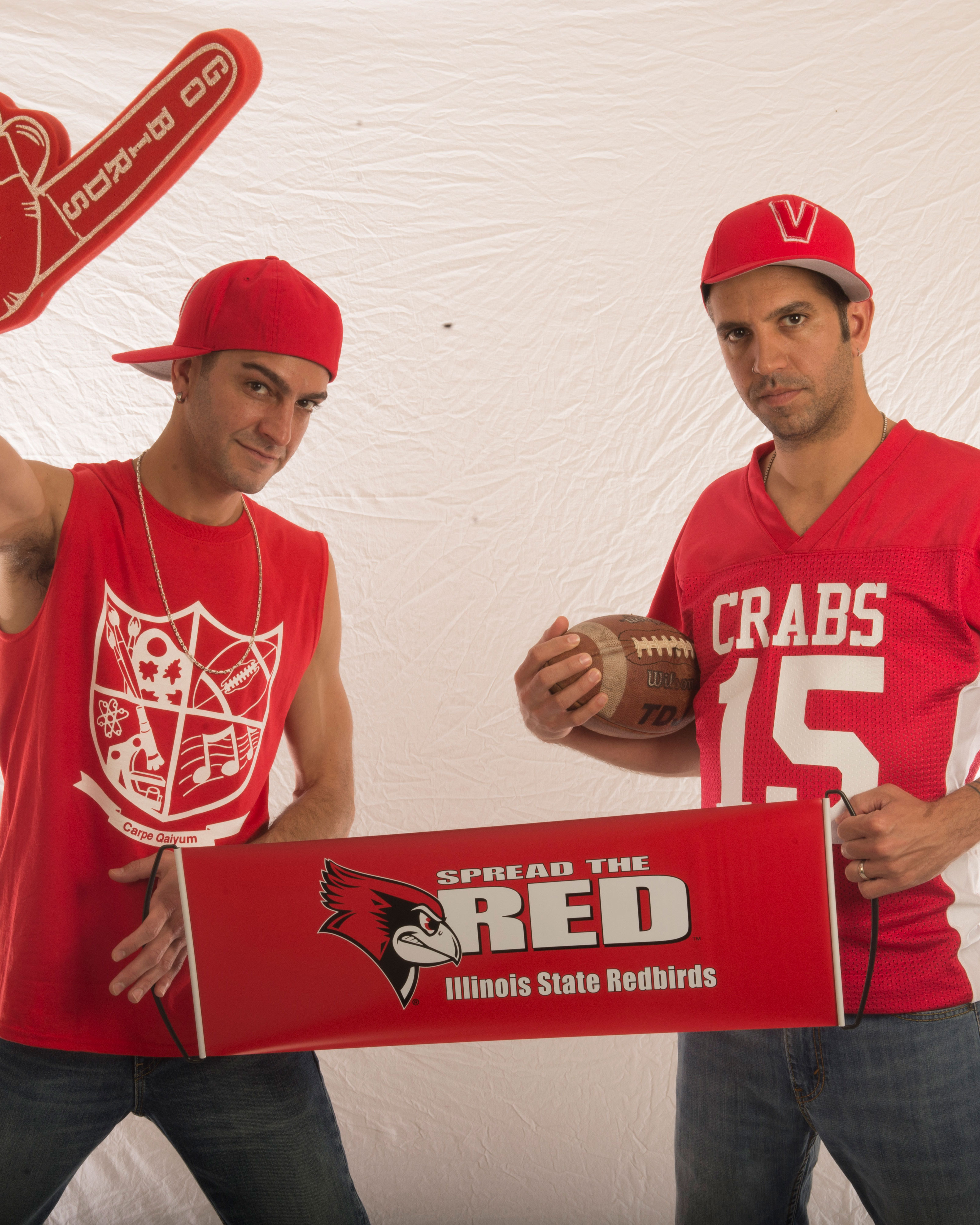 World-renowned contemporary theatre artists the Q Brothers (The Bomb-itty of Errors, Funk It Up About Nothing, Othello: The Remix) are coming to town to share with us their hysterically funny two-person adaption of Shakespeare's Two Gentlemen of Verona. In their re-imagining of the classic tale, these "two gents" are high school football stars at Verona College Prep who learn a thing or two about love, learning and loyalty. We are thrilled to have the Q Brothers join us to direct this 75-minute wild ride, which will feature two actors playing all the parts!

At Verona College Prep, Valentine and Proteus are football co-captains, but Proteus decides to quit football to pursue art... and Julia. Valentine meets Sylvia, the new cheerleading captain and girl of his dreams, but coach insists that he stay focused on the upcoming game. Lance, the water boy, tells Valentine that Sylvia only dates smart guys. Proteus's father forces him to continue playing football, which also means that he and Julia can't be seen together. They agree to pretend to not like each other, and Julia asks Proteus to wear her black bra under his uniform to remember her. Valentine receives an A in Biology, and Sylvia agrees to go to the dance with him. Proteus tells Valentine that he and Julia are over, and when he sees Sylvia, he also falls in love with her. Valentine admits that he cheated to earn his A. Julia disguises herself as "Raul," a water boy, to be closer to Proteus. Proteus turns in Valentine for cheating, and Valentine is suspended. "Raul" confronts Proteus when he flirts with Sylvia, and Proteus asks "Raul" to give Sylvia the black bra. "Raul" finds Sylvia to give her the bra, but Sylvia refuses it. Proteus searches for Sylvia, but Sylvia still loves Valentine, even though he plagiarized. Julia confronts Proteus, and Valentine has redone his homework and gets back on the football team. Sylvia and Valentine get back together and go to the dance. At the dance, Proteus apologizes to Valentine. Raul/Julia reveals herself to Proteus, and they stay together.

An adaptation of Two Gentlemen of Verona, Q Gents is more accurately described as an add-RAP-tation: an adaptation of an existing text, using the language of hip-hop. Set in a modern high school in Venice, California, Q Gents' young men, Proteus and Valentine, explore youthful love, betrayal, and loyalty just as they do in Shakespeare's original... but to a decidedly more modern beat.

Shakespeare's Two Gentleman of Verona is presumed to have been written somewhere between 1589 and 1592, one of his earliest plays. The pairs of young lovers – Proteus and Julia, and Valentine and Silvia – are as starry-eyed and impulsive as they are engaging. Set in Verona, Milan, and somewhere in the forest, the play contains some devices that Shakespeare will hone throughout his career–unsympathetic and even unmoving fathers, disguisings, and a forest where misrule – and freedom – abounds.

So why hip-hop? What is it about Shakespeare's words that lend themselves to add-rap-tations? A popular misconception of Shakespeare's poetry is that it was even in its own time a heightened, somewhat untouchable language. Shakespeare, however, was a linguistic entrepreneur. He created new words, new phrase patterns, and laid down a beat that his actors could follow (a.k.a., iambic pentameter). Flash forward. Like Shakespeare, today's hip-hop artists pull from today's conversational language, lay down a beat, and reinvent or riff on the language.

Shakespeare's works contain a musicality and fluidity that the Q's prove can pair well with hip-hop poetics. London's Hip-Hop Shakespeare Company argues, too, that the similarities between the Bard's work and hip-hop are "striking..."

Both hip-hop music and Shakespeare's theatre represent energetic and inventive forms of expression. Both are full of poetry, word play and lyricism. Both deal with what it is to be human, and issues from people's lives, and of course just like Shakespeare's work, hip-hop is all about the rhythmic tension of words... As a media-savvy popular entertainer and talented businessman, we think hip-hop would have been Shakespeare's thing - a truly old-school Jay-Z. (See hiphopshakespeare.com)

The Q Brothers' 1999 Off-Broadway hit The Bomb-itty of Errors (an add-rap-tation of Comedy of Errors) brought the company their first accolades. Since then, the company has brought their add-rap-tations around the world – literally. Chicago Shakespeare Theater has served as a creative home, the site where they've developed Funk It Up About Nothin' (add-rapted from Much Ado About Nothing), the popular (as in repeatedly playing to sold-out crowds, both seasons that it's been produced) A Q Brothers' Christmas Carol, and Othello: The Remix. The latter title was commissioned by London's Globe Theatre and premiered as part of its "Globe to Globe" festival – one of 37 plays presented from around the world. That play, following performances at CST, has since toured the globe (see what we did there?), closing this spring with performances in Dubai and Abu Dhabi, UAE; Melbourne, Australia; and Auckland, New Zealand.

Remixing Shakespeare's words, adding a beat, and charming audiences wherever they go, the Q Brothers emerged as leaders in the hip-hop theatre movement, making the Bard accessible to people from all walks of life and proving that Shakespeare's stories need not be lofty and difficult. Along the way, they're turning younger audiences on to Shakespeare. Chicago Tribune theatre critic Chris Jones described an Othello: The Remix audience as "an audience with an average age about half that of your typical theatrical crew [and] notable for the abundance of parents with teenagers in tow." The performance that night, according to Jones, "won over both the enthusiastic ticket buyers and those dragged there – no mean feat, that."

The Q Brothers' company includes four performers: G (Founder and Creative Director) and J (Creative Director and Musical Director), who audiences will see onstage in Q Gents, as well as company members Jackson Doran and Postell Pringle. Doran also serves as the company's Education Director, coordinating their community outreach programs. The Q Brothers embrace an expansive mission, bringing workshops and performances to schools, prisons, and community centers. Their workshops for kids in various cities reach youngsters from age 5 onward. Younger children learn the rhythm and language of hip-hop, while older children might start from a text and create their own add-rap-tation. Recently, the Q's brought Othello: The Remix to Cook County Jail, performing for an audience of about 500 their version of Shakespeare's classic story of love, jealousy, and betrayal. In an online video, J comments, "This is a group of people who have been deemed by society ... as not having much worth. ... Part of what it became is a statement that we believe that you do have worth, and our time is well spent to share our art with you." In the words of one prisoner, interviewed in the same video, "We appreciate...somebody taking the time out to talk with us as human beings." His words resonate profoundly with the final words of Othello: The Remix: "In a cold, dark and unforgiving system we struggle with our destiny. When the world is crumbling, emerge from the rubble and your love will surely set you free."

The Pantagraph: Brokaw: The beats go on in fun 'Q Gents' remix