Join us for a day of golf, food, and friends - all in the name of the John Stevens Memorial Fund. Funds raised at this event support the artistic excellence of the Illinois Shakespeare Festival by providing for the salary of one or more professional Equity Actors each season.

Thank you for your interest. Due to COVID-19, the Illinois Shakespeare Festival is unable to host the John Stevens Memorial Golf Outing for summer 2020.

Enjoy the greens with friends or co-workers! Golfers will be playing in teams of four. You may register as a group, or as an individual. Teams from a business or Illinois State University Department are eligible for the coveted Bard's Birdie Trophy.

The John Stevens Memorial Golf Outing is a great opportunity to support the arts and promote your business to the community. Make your mark with a Hole Sponsorship!

Also, a big thank you to all of the individuals and companies who have donated items to the silent auction!

Funds from the 2019 Golf Outing supported John Stevens Equity Actor Chauncy Thomas, who you may recall as Orlando in As You Like It, Mr. Bingley in Pride and Prejudice, and Octavius in Caesar. Who will you bring to the Festival this year? The John Stevens Memorial Fund was established in 2003 in memory of John Stevens, who was a member of the Illinois Shakespeare Festival Society Board of Directors from 1984 until 2000 and served as the board's president for three years, from 1997 to 2000. During his final year as president, the Festival took a significant step forward by issuing its first Actors’ Equity Association (AEA) contract to a member of the ISF company, an accomplishment of which Stevens was extremely proud. John Stevens' commitment to and passion for the Festival was unwavering. The John Stevens Memorial Fund was created to honor him and ensure that future funding is available to help support AEA actors.

Registration is now closed. Participants and hole sponsors who have already registered will be contacted about their registrations/donations. 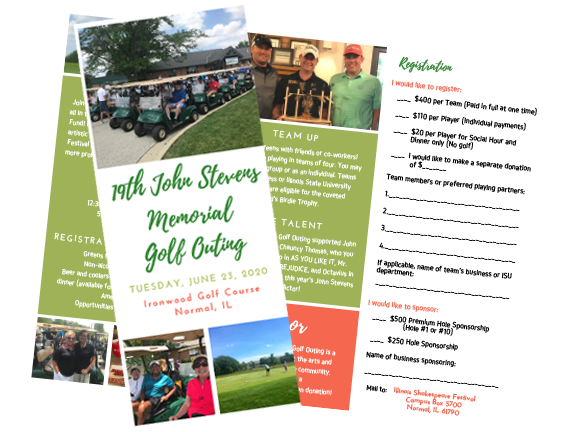